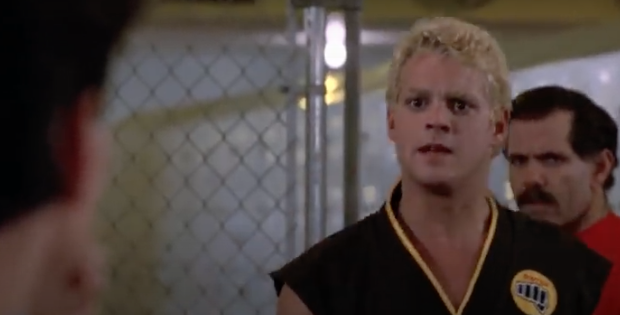 Steve McQueen's Son was the Villian in Karate Kid: Will Cobra Kia Bring Back Dutch in Season 5?

Little known fact of the original Karate kid movies, the Karate Kid cast included a villain antagonist named Dutch who was Steve McQueens son in real life! While Johnny Lawrence gets all the fame for Cobra Kai, due to his final fight with Daniel at the All Valley Tournament in 1985, Dutch was a major character in the entire Karate Kid movie fandom. This has us wondering why Netflix and Sony Pictures haven't included Dutch in cameo appearances in their hit Cobra Kai Series.

Real Quick, if you want to learn Karate or improve your current skills, stick around until the end to check out a free online karate membership.

In season 2 of Cobra Kai series we hear that Dutch is serving time in federal prison.

Spoilers if you haven't seen Cobra Kai season 4, go ahead and stop reading.

Now that Kreese is being sent to prison, will he link up with Dutch and form some classic antics? It was confirmed by Cobra Kai filmmaker / director Jon Hurwitz that they had reached out to the original actor Chadwick Steven McQueen but he initially wasn't able to do the show. Now that it has become one of the biggest shows from Netflix including cameos from Carrie Underwood and many of the original cast of the Karate Kid Franchise, perhaps Chadwick will reconsider for season 5.

Steve McQueen was, at one time, known as the King Of Cool and many would recognize him for his role in The Great Escape in 1963 which was a cult classic. Steve McQueen got his own endorsement by Ford and a documentary about his work for the movie Le Mans in 2015. In 1974 he was actually the highest paid movie star in the world. His son Chadwick took on the role of Dutch in the Original Karate Kid in 1984.

Chadwick McQueen is a professional sports car driver and endured a horrific crash during a race in Daytona FL, leaving him in a 3 week coma with many broken bones. In an official interview he is thankful to be alive, but this has definitely altered his abilities in Karate as his body heals. McQueen is financially stable from his own work in combination with the inheritance from his famous father so he doesn't need any more film roles.

Sports Illustrated ran an interview with the Karate Kid star in 2018 and rehashed some old memories of the original show.

“It was like going to college and having your first new batch of buddies. We were the Cobra Kai snake, all one piece,” - Chad McQueen

In an interview with Jenny McCartney in 2018 William Zabka who plays Johnny Lawrence and Ralph Macchio who plays Daniel LaRusso confessed some discomforts about the original filming of Karate Kid and how the rivalry was made very real off set for the performance.

“John [Avildsen] didn’t want us to get chummy… He encouraged me to hang out with the Cobra Kais where I belonged apparently,” - William Zabka.

Meanwhile Ralph held some distaste towards Chadwick during filming of the set, because of the coldness of the actor on and offscreen.

“I would always joke when I was at the lunch table time I’m like do I even belong over there? Dutch was staring me down,” - Ralph Macchio

Dutch was a major bully in the Original Karate Kid movie and egged on the Cobra Kai group to be extra violent. He gave a realistic and chilling performance that made him both scary and hated and his martial arts was really good to boot!

Hopefully Season 5 will give us a glimpse of McQueen but for now there is no official release. However at this time it's confirmed he will not be attending.

Before you go, check out these awesome articles about the best Karate Gi and Karate Belts on the market!