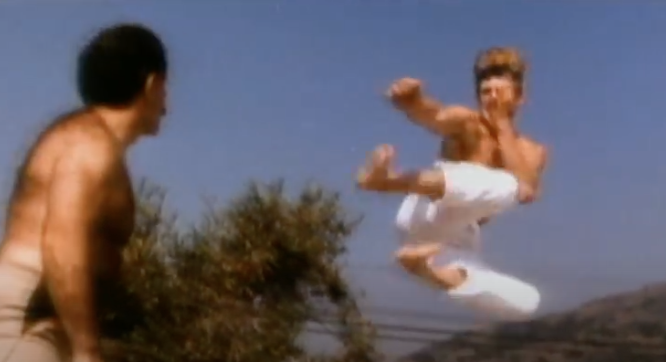 If you love the Karate Kid movies and the Cobra Kai Series on Netflix, you'll enjoy this fun article that highlights some of the best mess ups, bloopers, and mistakes that happened while filming. It's natural to mess up and nobody is perfect, but it does make some great content and we are happy that they shared!

Want to learn the Kata from the Karate Kid movies? It's a real Kata from Goju Ryu Karate style! If you enjoy this and want to learn karate online like Eagle Fang Karate, then stick around for the end of the article to sign up for your free or premium membership. Don't forget to research the 11 Best Karate Gi if you're looking to get serious!

"Someday the fight may come to you and I want to make sure you're ready. That's why I'm opening up Cobra Kai;

So we can fight back. Take down...

No I'm not opening up Cobra Kai, am I? Probably not. That would change the whole show" - Ralph Macchio

" I appreciate you coming in but there are no Cobra Kai. Uh, a no girl Cobra Kai."

Behind the scenes we see the crew performs stunts very slowly, it sure does look cooler on screen post editing.

The director wanted a test scene of Johnny and Daniel fighting on the beach. In this clip we see Johnny throw some very real Karate techniques that aren't safe or filmed in slow motion.

When throwing stage combat techniques, the crew misses by about a foot and through the magic of Hollywood the angles and editing helps it look more realistic.

In this behind the scenes footage, we see the Cobra Kai crew with Hawk practicing some XMA style kata. This is pretty far from the tradition of the original Karate Kid movies where Daniel was the only one doing Kata. If you want to learn that Kata, check out this Article 'How to Do the Kata from Karate Kid'!

You can see Daniel wearing foot protectors as he lands a very real round kick to the stomach of the other actor in this behind the scenes footage. In 1984 Hollywood didn't have the same regulations and precautions that it does today. The Karate in Karate Kid was...Real! The Cameraman did a great job capturing the angles.

If we compare this style of Karate to the new Cobra Kai All Valley Tournament it is a little depressing. The uniforms are colored and there's lights, lasers, and even Carrie Underwood singing to a stadium of people. While this is all very entertaining, I think we lose a lot of the traditional Karate aspect to the series that makes it believable and relatable.

You can see that the Cobra Kai series uses a lot more ropes, and under trained actors where the original Karate Kid movies enlisted actual Karate actors as it was a more popular sport back then before the movies were even made.