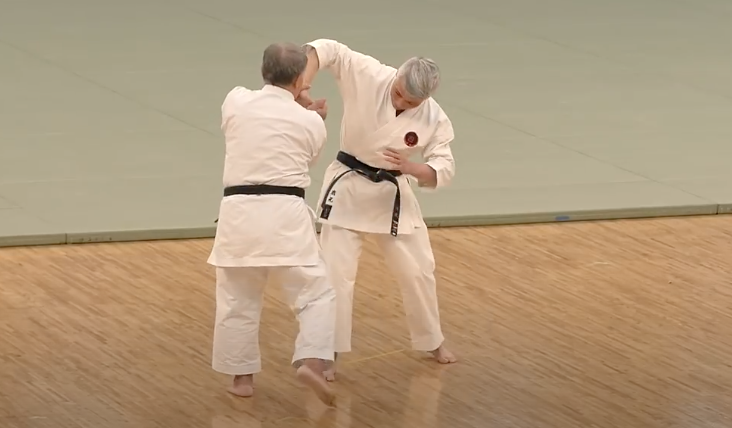 What is Goju Ryu?

We teach ShitoRyu Karate, so we have HUGE respect for Goju Ryu Karate. Why? Because Shito Ryu Karate was actually derived 50% from Goju Ryu in Okinawa Japan! The combination of Hard Style Goju Ryu and Soft Style Shorin Ryu is how Mabuni made Shito Ryu. If you're looking for online karate lessons with teachings and katas from Goju Ryu, our programs are a great choice.

Karate has a wide range of styles to choose from, each with its own set of philosophies and beliefs. We'll look at Goju Ryu Karate in this blog, which is one of the art's original forms. Goju Ryu is a popular martial art that is also known as Karate's'soft hard' style.

Goju Ryu and its principles are generally respected by the Karate community as well as outsiders. The reason for this is that, unlike many other Karate styles and types, it stays true to its roots and isn't watered-down. It still includes Kumite or freestyle fighting, as well as some extremely difficult strength and conditioning exercises. In addition to being the inspiration for Kyokushin Karate, which is known for its toughness and brutal style, Goju Ryu is also given credit for its toughness and brutal style.

The Birthplace of Goju Ryu?

Goju Ryu is a Japanese martial art that originated on the island of Okinawa. This is regarded as the birthplace of Karate, as well as the birthplace of many other well-known styles. This is in contrast to Japanese mainland Karate styles, which are frequently geared toward point fighting and competition rules. As a result, both in terms of philosophy and training stance, Goju Ryu is considered traditional.

Specifically, Goju Ryu is known as "hard-soft," and you'll hear it a lot when you train it. A physical challenge is referred to as "hard" Karate, which refers to sparring or drilling. If you want to put it another way, blocking a punch with your forearm bone is a physically demanding exercise. Soft deflecting a move, such as a quick dodge, would be considered soft,' which would be taken into consideration.

The combination of the two styles makes Goju Ryu a well-rounded martial art. Often accused of being either too soft, which is not realistic, or too hard, which is brutal and causes injuries. Both are used in Goju Ryu, so it's a nice mix of the two that provides a good balance.

The Focus of Goju Ryu

Goju Ryu is known for being physically demanding at times, as well as being quite narrow and precise in its movements. The focus is on mastering these moves rather than becoming broad in all areas because it only uses 12 kata. This isn't a bad thing, and it can be beneficial to some. It's also important to note that because it's Okinawan Karate, it has traditional values.

It's important to note that if you're thinking about training, you should expect some intense and grueling warm-ups and conditioning exercises. Furthermore, Goju Ryu has a close-up fighting style, making it less distance-based than other Karate styles. It also incorporates some grappling and submissions, but the majority of the time is spent learning strikes. The emphasis on strength and conditioning, as well as a limited range of techniques to work on, is a major part of Goju Ryu's focus on close-quarter combat.

Getting a black belt in Goju Ryu

How hard you work and where you train determines how long it takes to earn a black belt, just like any other martial art do. It's difficult, however, to give a definitive answer because everyone is different. Most people can become a black belt in Goju Ryu in about 5 years of training, according to the American Goju Ryu Association.. So, while Goju Ryu is not unique or different from other Karate styles, it follows this pattern.

There are a total of 5 different belt colors to earn in Goju Ryu. The five belts are a white belt, yellow belt, green belt, brown belt, and black belt. The average Goju Ryu belt takes about 5 years to attain, as previously stated. Before earning your black belt, you'll have to train at each belt for just over a year. Keep in mind, however, that each person and gym has its own set of standards, so this isn't a set-in-stone rule.

Not to mention the fact that the belt system in each dojo may vary. Because Okinawan Karate is so varied, there isn't always a single system that everyone follows. Some places will have more belts or use stripes on each belt to demonstrate experience within the belt.

However, keep in mind that your goal of training should be self-improvement rather than a new black belt with flash. While you should be proud of your accomplishments, if your main goal was simply to achieve black belt status, it will be in vain. Most people outside of Karate, on the other hand, will be unconcerned about the color of your belt.

Goju Ryu and Self Defense

Goju Ryu is one of the most effective forms of Karate for self-defense. To begin with, one of the advantages of practicing Goju Ryu is that it physically prepares you for combat. Even if you're not a master of Karate techniques, Goju Ryu's physical transformation is beneficial in combat. You will become extremely strong over time, with excellent cardio and mental toughness. All of these characteristics are advantageous in combat.

If you practice Kumite, you'll naturally improve your strikes and learn how to defend while also being offensive as a result of your efforts. In addition to grappling, Goju Ryu incorporates other martial arts. While it isn't as extensive as Judo, it does include some useful takedowns and submissions. The most important thing to remember is that it's a very effective fighting strategy that's ideal for self-defense.

The 12 Individual Training Exercises or Katas of Goju Ryu

There are a total of 12 katas to learn in Goju Ryu. The first kata taught is Saifa, which is a traditional Karate stance. You can get into a striking position by crouching with a lead leg and arm and letting your other arm and resting leg hang back. The Saifa is the foundation of many attacks, and it also serves as a positional and defensive framework. It provides a solid foundation for other Karate techniques.

In general, Goju Ryu is an effective and beneficial Karate style that can be learned. With traditional, hard-working values, you'll get in shape and maintain your honesty, and it also has soft forms of training, making it very accessible to most people. In short, if you're thinking about learning Goju Ryu, it's probably one of the best Karate styles around. Goju Ryu has earned a well-deserved reputation as a self-defense and sports martial arts. With this in mind, it's worth keeping an eye on.