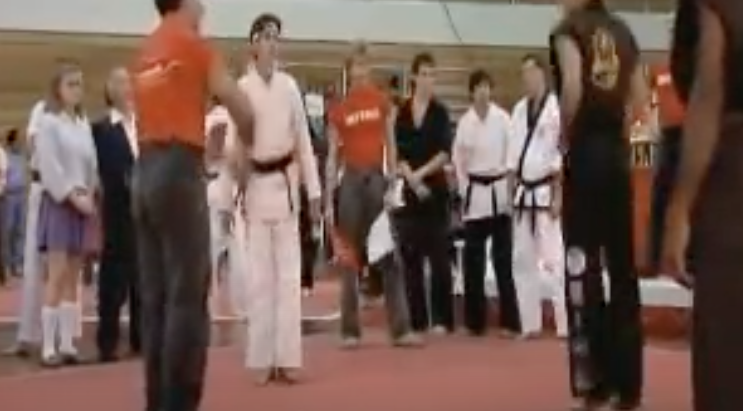 If you're like me, then you've binge watched the Cobra Kai Series on Netflix and got around to season 4 with the All Valley Championship.

The various teams like Miyagi Do, Cobra Kai, and Eagle Fang wore diversely colored Karate Gi and if you'd like to wear one we've compiled a list of what they are and where you can buy one!

Quickly, if you landed here looking for free karate lessons, stick around to the end where you can create a free membership!

First off, don't fall for the Cobra Kai Costumes on Amazon, they look ok in the pictures but the quality is very thin and stretchy, it's like a t shirt vs a kimono.

When shopping for the best Karate Gi Brands, you want to look for high quality that gives performance, durability, and comfort!

The Cobra Kai Gi is a Black Heavyweight Karate Gi with the Sleeves detached and hemmed. The new Cobra Kai sleeveless uniform for Season 4 All Valley Tournament has yellow piping on the collar and a fist patch on the left lapel. Theres Also a Screen Printed cobra kai logo on the back.

The Gi is at least a middle weight uniform as it holds it's shape and creases. From my experience I would say it's a 7oz or 8oz Gi fabric.

To recreate this uniform, simply buy a middle weight black sleeveless Karate Gi from Century Martial Arts. This is the exact same Karate Gi worn by both John Kreese and Johnny Lawrence in the series. I'm assuming they forgot to design the adult sized costumes for the show.

Century had several product placements during the Cobra Kai Season 4 Series that you may not have noticed.

The season also contained an Easter egg that nodded to the Founder of GojuRyu Karate, Chojun Miyagi. This would explain the use of the Kata Seinchin that's seen in several episodes.

Pair this gi with your Cobra Kai Patches and you'll be looking mean and ready to win your next fight!

If you want to sew on the canary piping that was used to create the unique cobra kai costume and you're handy with a needle, make sure to grab this last step.

Next up is the famous Miyagi Do Karate Gi. Simple, classic heavyweight White Karate Gi. I could tell exactly which model that the uniform was just by looking at how the fabric SWALLOWED Sam (The Kata Elite is made with an "Extended Skirt", and the orange piping inside the collar of the Gi.

It featured Shortened Sleeves and Pant legs as well.

To Complete the look, you'll need to sew a Miyagi Do logo on the bottom label of the Gi and screen print the large bonzai on the back. Just grab an iron on print kit if you're looking for a quick and easy application.

Eagle Fang Karate Showed up in a Bright Red Uniform and Sensei Johnny wanted to show off how badass his new style was. This is something quite different from the Original 1985 Karate Kid Movie, where the only Karate Uniforms were White, Black, or White with a Black Stripe. We also see another unnamed team donning blue this time around.

Johnny is a rebel, we already knew this so the Red Karate Gi is really no surprise. As we know, the show hints at Johnny loving things from the late 80's and also Fighting / Karate. So maybe his new Gi choice was inspired by the 1987 Arcade hit Street Fighter, where American Karate expert Ken stars as a Red Karate Gi wearing fighter.

You can achieve this Eagle Fang Karate Gi look by buying the middle weight classic cut Century Karate gi. This is a brushed cotton gi that has a thick premium look. Cobra Kai producers and film crew selected heavier weight his to create an authentic look, vs the student quality gi that we saw in the first season that resembled pajamas.

If you're looking for a high quality karate gi, take a look at the Karate Kid Cast who have traditionally used Century Martial Arts since the 80s!

“Obviously with Cobra Kai, there’s the legacy of how those look and you don’t mess around with what’s not broken,” Helmer said. “Just keep that tradition of those carrying along. I kept with the general style. I updated it a little bit for modern times because the styles have changed. But, we also use Century Martial Arts is our suppliers of the gis because they were for the original movie as well. I wanted to keep the legacy of that going along. We use their current model of the sleeveless black gi that they offer and then embellish it with the stripe and the patches.” - Cobra Kai Designer Frank Helmer (Source: Showbiz Cheatsheet)