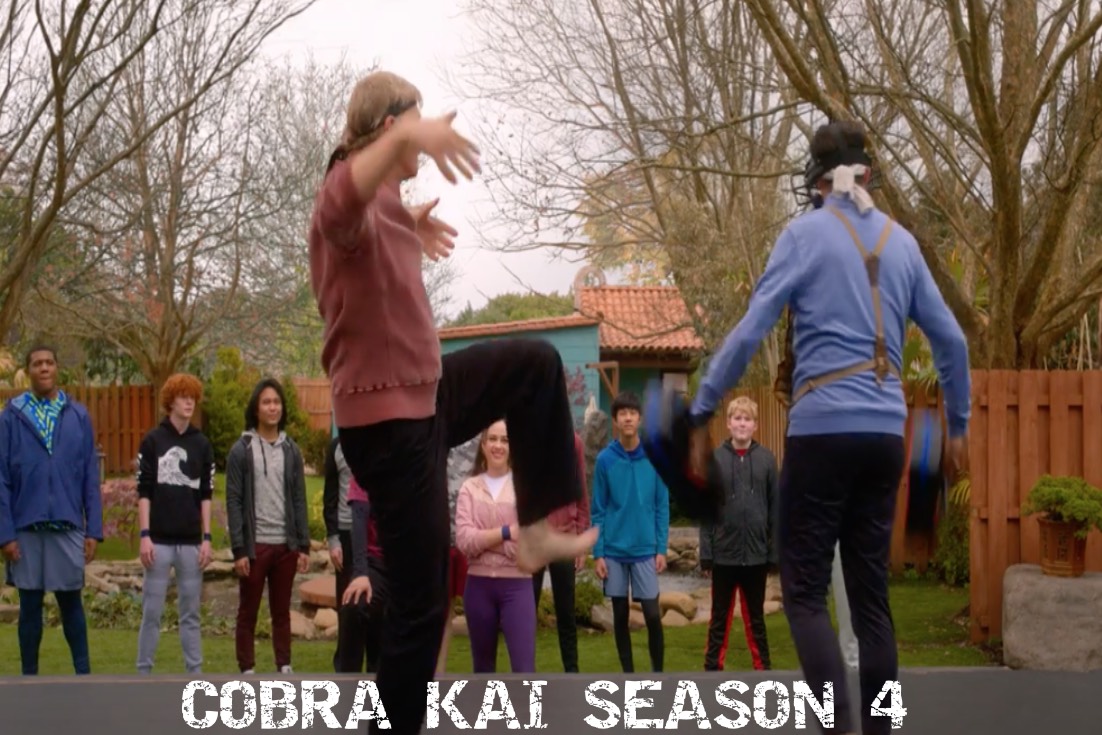 This post was obviously a tongue in cheek reference to his character in the series who couldn't keep up with technology and was proverbially stuck in the 80's, alongside his taste in music, beer, cars, and movies (his grudge from The Karate Kid still apparently bothering him).

His last post had been from Jan 15th, so he obviously took a lot of time dedicated in character to the movie, leaving his 1.6M instagram followers with little updates on the series fate.

Cobra Kai was released on YouTube Red in 2020. However, given the recent trend of ad revenue from YTRed shows, this may switch to Google Play or similar advertisements instead. We will see how it progresses throughout the release date announcements and beyond that.

The actors have not yet been confirmed for what roles they'll be playing in Cobra kai Season 4 other than the return of The Karate Kid series alumni William Zabka as Johnny Lawrence and Martin Kove as Kreese.

Cobra kai was one of the best rated shows on YouTube Red, and has garnered many awards. It's likely that Cobra kai will be renewed for a 5th season (the karate kid movie spanned 3 movies, this series spanned 4 seasons).

It's highly likely that Johnny Lawrence's character will play a larger role in the show with his aging states as he is closer to William Zabka's actual age now compared to Daniel LaRusso - Ralph Macchio who plays "a teen" in the karate kid movie.

This also presents a problem because Ralph Macchio has been confirmed as only playing an appearance at the end of Season 4 unless they introduce a time traveling scenario similar to Teen Wolf or  Doctor Who where they can make the karate kid movie take place decades in the past, or they rewrite history.

The karate kid movie is a classic and one of the most famous karate movies ever made, it is illogical to try and re-write history unless there's some massive loophole to exploit by introducing a grandfather paradox that would allow for a reboot of sorts. That being said, having Johnny Lawrence turn into Daniel LaRusso with an aged Zabka playing his grandpa is a hilarious idea but probably not the way Hollywood wants to go after their latest karate kid remake film failed both critically and commercially.

It would be interesting if Cobra Kai Season 4 featured characters like Bill (possibly played by William Zabka, but doubt it because of his old age), Elisabeth Shue as Ali Mills (Daniel LaRusso's love interest who started dating in the karate kid 3 movie) in a cameo appearance in Season 4 to see where her life went.

It would be interesting too if Daniel LaRusso got married again and had kids - he could return at this point to meet his grandkids.

We think Johnny Lawrence will die offscreen between seasons or something similar. It is unlikely that William Zabka would leave the karate series for good after cobra kai season 4 even though he claims he wants out "for good" because ultimately the karate kid series is what made big time in Hollywood since 1984 and karate kid 2010, and he still appears in karate kid themed episodes of television.

It would be good if Cobra kai season 4 featured less karate and more life lessons such as Johnny learning how to get along with his family after finding out his father died. We'd love to see Daniel LaRusso's kids return too since they probably grew up without him after he was absent for so long because karate kid 3 presented a problem where Ali Mills went into hiding while expecting because her parents didn't like the idea of her marrying an old man (Daniel LaRusso) knowing that karate kid 1 ended with them still dating and not married yet.

Here is the Official Release Trailer:

Netflix also released some fun tournament teaser content for fans to enjoy while the show is prepared for release in December.

A second official trailer was release in October:

The original show was part of Youtube and can still be purchased to view on their official platform. This season of the karate kid series is only available on Netflix.

Who is the Cast of Cobra Kai Season 4?

Main cast from karate kid 1, karate kid 2 and karate kid 3 will be reprising their roles as adults at a karate tournament for a kung fu cobra kai fight.

Daniel laRusso: the karate kid himself will have to face his greatest foe Johnny Lawrence once again after being invited to a kung fu tournament competition hosted by him. He's now a successful businessman but he'll have to put his best kata moves on display to beat an opponent with decades of experience in teaching young children how to defend themselves.

Johnny Lawrence: has been running his own dojo since he gave up on being a thief or criminal after being defeated so many times by Daniel LaRusso in karate karate kung fu tournaments.

William Zabka: plays Johnny Lawrence will be back to reprise his role again after the karate kid movie and karate kid kung fu sequels did so well for both this series and its actors. Fans love these characters and we're excited to see where we left off with them all those years ago and what they've become because of their karate skills training and teaching others how to fight using karate kung fu moves. This time it's a kung fu cobra kai vs karate kid competition hosted by Johnny Lawerence himself in chessington near London.

What is Cobra Kai Season 4 about?

All 10 episodes of season 4 will be released on December 31 on Netflix and will explore what it's like to compete as karate kids and kung fu cobra kai karate adults in a kung fu tournament on New Year's Eve.

Though the series was just announced by Cobra Kai, we do know that it is scheduled for release some time this year so be sure to keep an eye out for its first episode air date December 31st 2019 on the official Cobra kai channel on youtube or any social media accounts you follow them on.

How can I support the makers of Cobra Kai Season 4?

Fans of the original karate kid movie will definitely want to watch all 10 episodes of this new season since karate kid actors William Zabka and Ralph Macchio are back which is enough reason for any karate kung fu fan to tune in.

Click on the link below to show your support by signing up or following them on their official social media accounts and YouTube channel. They will post updates on karate kid kung fu season 4 release date, karate fight spoilers and more info about this series as soon as its made available.

Note: this article is not an official announcement of karate kung fu cobra kai season 4 release date or karate fight spoilers about karate kids vs kung fu cobra kai in 2019, just a news story to inform fans about Cobra Kai updates and announcements being made by the cast and crew online through their social media accounts and Youtube channel.

Who choreographed the fighting in The Karate Kid?

What are some of the kung fu cobra kai karate fight scenes from Cobra Kai Season 4?

There is only one known kungfu cobra kai fighting scene from this series so far which was announced by Johnny Lawerence on Instagram live video. It will be a kung fu tournament fight between an adult Daniel laRusso and adult Johnny Lawrence once again after all these years since their last karate match-up where Johnny lost to Daniel LaRusso at a kung fu tournament competition hosted by Miyagi who won it back then by defeating kung fu karate Johnny Lawrence in kung fu karate karate kung fu.

Why was the karate kid movie such a big international box office hit?

The Karate Kid film won several awards and it ranked as one of the best karate movies ever made by critics and lovers of karate all over the world. That's why we loved watching it back then and now we still enjoy watching it again and again because its one of those rare films that never gets old with each watch.

Who choreographed the fighting in Cobra Kai?

The Husband and Wife Duo will be the kung fu karate fight choreographers for karate kung fu cobra kai season 4.

What are some of the fighting styles in Cobra Kai Season 4?

There will be kung fu karate, taekwondo and muay thai martial arts action with a few MMA fights too if your into that sort of thing.

How many episodes does Cobrai Kai Season 4 have? 10 episodes just like every other Cobra Kai karate kid season so far. They haven't been released yet so we can't tell you which episode is about how long it is but will update this article as soon as this info becomes available to us from official sources online.

To Learn Karate check out our Online Karate Programs Here.