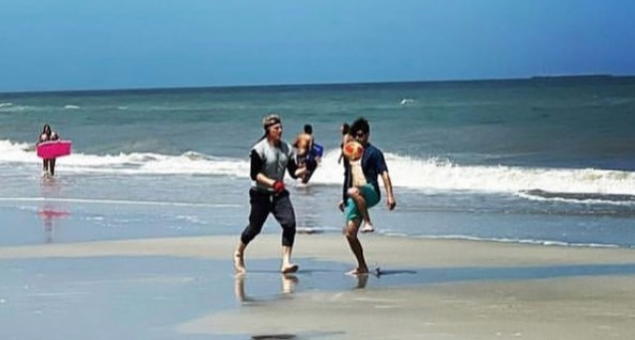 Drew Barrymores favorite scene was when Miguel and Johnny are talking in the restaurant in Season 4.

Xolo likes that they get to bring new respect to Billy Zabka and his Johnny Lawrence character. Drew Barrymore is also a big Carrie Underwood fan, so she was excited to hear that she was on set.

Ralph Macchio stepped in to talk about Cobra Kai and the nominations and pop culture fame the show is gaining and dropped a little info about the upcoming confirmed 5th season that wrapped production mid December 2021.

According to the instagram of Actress Annais Rojas, who finished filming for Season 5 of Cobra Kai in Puerto Rico (Where they filmed the upcoming scenes depicting Mexico), filming has concluded.

A post shared by A N N A I S (@annaissrojas)

Anna, was the runner up for Miss Earth Puerto Rico and plays a new role in the upcoming 5th Season. Behind the scenes footage shows some line dancing with the boys of Cobra Kai including Johnny's son, Robby (Tanner).

We also get to see a picture of Miguels dad! The Actor Luis Roberto Guzman is confirmed by leaked photos to be playing the role in the upcoming season, per tiktok and instagram.

While it's unconfirmed at the time what this young actresses role may be, it appears to be a possible new love interest to shake things up while the boys are in Mexico. Robby and Miguel are seen filming a scene together in Mexico, so this is a new possible querrel over a girl between the two.

Other notable new characters we see in behind the scenes Cobra Kai footage include actor Ricardo Ares. He confirmed his work as an extra via Instagram, so his appearance will be but brief.

Genesis Tremols Rodriguez has also appeared in Cobra Kai Season 5 although her role isn't announced. She is a professional bikini model, so it may be a cameo role for the beach scene.

We found a leaked beach scene in which Johnny Lawrence will be training on the sand and knock a soccer ball away from a kid to show off his old moves, reminiscent of the first Karate Kid Movie Opening. This was leaked by director Jon Hurwitz.

Another famous Puerto Rican Actress and model will be featured as a small part of the beach scenes, Zaret Sahar. Zaret is very beautiful and will be part of the swimsuit scenes. She was also seen teaching line dancing in behind the scenes footage.

We get to see some behind the scenes photos with Johnny and Robby wearing FBI shirts, giving us some insight into possible scenes where they will try to rescue Miguel from "Mexico" (filmed in Puerto Rico. In more leaked photos, from the rear, we actually see that the back of the Shirt says female body inspector. This alludes that we will get to see the bikini models we mentioned earlier, and there was some footage on tiktok of the Cobra Kai season 5 afterparty where Ralph Macchio and William Zabka did some Karaoke together.

Banners on the building displayed EHV with a fist logo, but we could not determine the location in San Juan.

IF you enjoyed this article, don't forget to check out these related reads!

The Kata From the Karate Kid