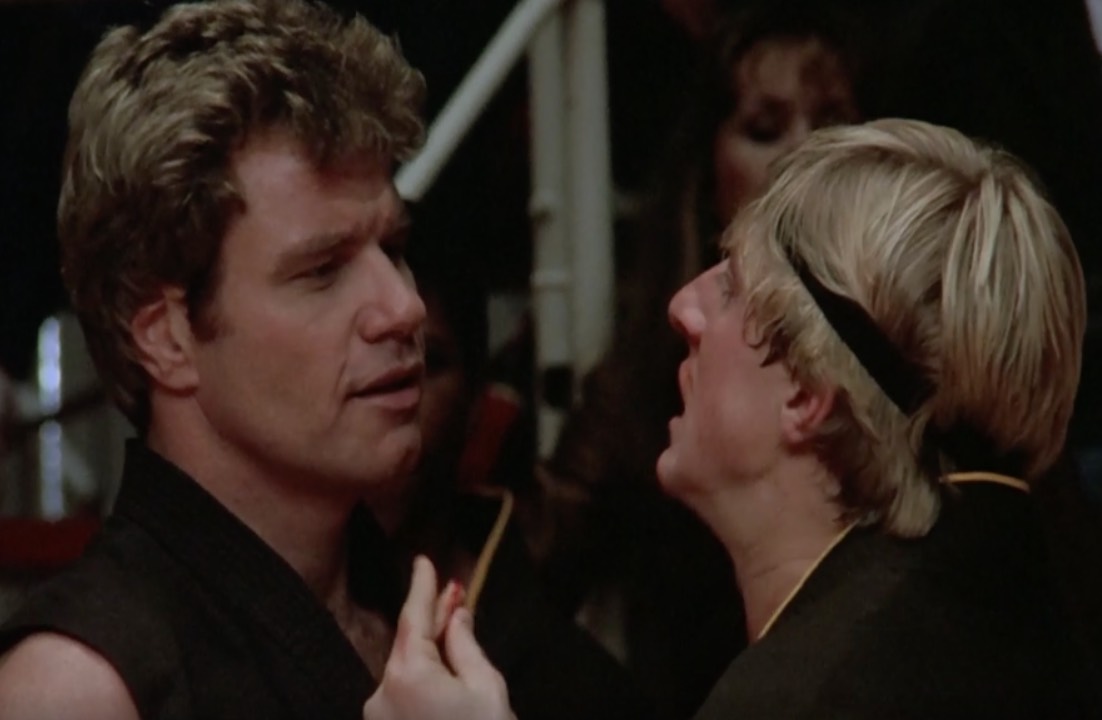 It was the summer of 1984, such a simpler time where the biggest news was Michael Jackson's hair catching fire (and his 8 Grammys), finding out what AIDS was, Miss America was in Penthouse, NASA launches Discovery and Challenger, and Crack takes over Los Angeles.

Ok, so maybe not great news.

However, 84' brought us some of the most epic Technology releases, TV shows and Movies of all time including Apple Macintosh Release, AMC was created, Beverly Hills Cop, Children of the Corn, Footloose, Ghostbusters, Gremlins, A Nightmare on Elm Street, Once Upon a Time in America, Police Academy, Purple Rain, Red Dawn, Sixteen Candles, The Terminator, This is Spinal Tap, and you guessed it, The Karate Kid.

The Karate Kid inspired so many kids suffering from bullies to stand up for themselves, or at least try.

Without further ado, here is number one in our list.

How Old Was Ralph Macchio In The Karate Kid

Ralph Macchio was born on November 4, 1961 making him 22 years old at the filming of The Karate Kid.

Funny enough, some confusion probably arose after leaving the 1983 film The Outsiders, where Ralph played a character named Johnny. Now the name of his Antagonist in The Karate Kid.

Ralph wasn't quite the fit of the original character, but the directors liked him so much they rewrote some of the character and the rest is history. This fun fact includes changing the characters name from Daniel Webber to a more appropriate Daniel LaRusso.

How Old Is Ralph Macchio In The Karate Kid

Cobra Kai, a Netflix series, continues it's 4th Season Release December 2021, and has confirmed the existence of a 5th Season to come. This makes Daniel, played by Ralph Macchio, 60 years old at the time of Filming!

Wow, most 60 year olds are retired now. The Student has become the teacher, and continues on the legacy of Mr. Miyagi.

How Old Was Elizabeth Shue In The Karate Kid

Elizabeth Shue, beloved star and teen heartthrob, stole millions of kids adoration as the love interest to Daniel in the Karate Kid. Elizabeth Shue was born on October 6, 1963 making her 20 years old at the time of filming!

The cast looked so young and fresh during filming and gave us the imagined assurance that we were really witnessing some high school beef going down. Such a relatable role conveyed by talented actors and actress.

Elizabeth Shue joined in on continuing the fun in Cobra Kai, the Netflix series, appearing in Season 3 and onward, reconnecting with William Zabka's character: Johnny.

How Many Karate Kid Movies Are There

In the official The Karate Kid franchise, by Robert Mark Kamen and Columbia Pictures, there are actually 5 Movies and 2 Television Series that are considered canon releases.

The Next Karate Kid, garnished some criticism from die hard fans as we see a new director and screenwriter are introduced, and the only original character to return is Mr. Miyagi (Pat Morita). This being a Canon release makes me wonder, are we going to see Protagonist Julie Pierce (Hillary Swank) appear in the ongoing Cobra Kai series?

How Old Was William Zabka in The Karate Kid

William Zabka was Born on October 20, 1965 making his age only 19 years old at the time of filming The Karate Kid and 21 for The Karate Kid Part II. Now Zabka is co producer of Netflix hit series Cobra Kai, and is performing his role of Johnny Lawrence at 65 years old.

What Year Did The Karate Kid Come Out

The Karate Kid Movie was officially released in box offices June 22, 1984 and grossed to 130.4 Million Dollars world wide. However, production didn't stop there.

When Was The Karate Kid Made

The Karate Kid began filming on October 31, 1983. Remember that Halloween scene where Daniel is a Shower Curtain? Yeah, me too and it's no coincidence. They started filming a Halloween scene on actual Halloween to capture some of the decorations and trick or treating etc to give it a real feel.

Who Played The Karate Kid

Well, this is Awkward, the original Karate Kid is a comic by DC for a character named Val Armorr which is totally unrelated to this Movie. The Karate Kid, Daniel LaRusso, is played by beloved star Ralph Macchio.

How Old Was Mr. Miyagi In The Karate Kid

Noriyuki Morita known as Pat Morita, played Mr. Miyagi in The Karate Kid and was born on June 28, 1932 making him 52 at the time of the box office release.

Want to learn awesome Karate and Kobudo like the Karate Kid? Check out our Karate Programs here to learn karate on mobile from anywhere in the world.