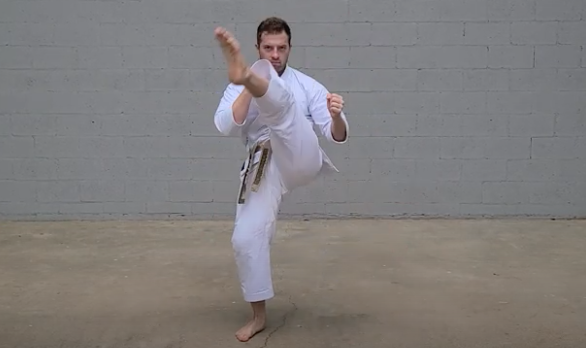 What is an Axe Kick and Does it Actually Work?

You’ve probably watched so many movies that you’re starting to wonder what an axe kick is. Are you familiar with it? Or if you are, the question then would be - Does an axe kick actually work? All of these questions will be answered as you keep on scrolling down.

Martial arts is truly an extensive field. One which should be given time, dedication and sincerity. Relatively, there are so many fighting styles that one can learn and so many basics that a student must know about.

First, we will try to define what an axe kick is.

Want to learn EVERY Karate Move?

Stick around for the end of this article to sign up for a free Karate membership!

What is an Axe Kick?

An axe kick is a martial arts technique that most martial artists use. Some people who have not had any proper training are not even aware that they are using the technique. An axe kick is sometimes called a stretch or hammer kick and it is easily characterized by strengthening the leg and lounging the heel onto an opponent, similar to that of a blade of an axe. This is somehow similar to Cresent Kick which has outward and inward styles of execution. This kind of MMA move has been successfully translated and used in Taekwondo competitions worldwide.

How is an Axe Kick Executed?

Since you already have a general idea of what an axe kick is, you’re now probably wondering how an axe kick is actually done. Just to give you a heads up, this move requires a union of flexibility and stretches, with the presence of mind. Constantly training can help you execute an axe kick that is powerful and effective.

Since an axe kick is not pretty common, it needs a lot of practice to be able to execute this form. To start learning the style, doing some basic stretching to warm up the body as well as the leg is very essential if you want to be able to lift your leg up too high.

After you’ve warmed up and stretched up, start with throwing straight kicks. This will allow you to adjust your kicks. Move one step forward and then execute your fighting stance. Hold your leg as high as you can. After getting some momentum, land down your kick to your target areas such as the opponent’s head, shoulder, or collarbone. You can slightly bend your foot first before stretching it high so that you can get the momentum and exert extra force. Depending on the situation axe kick can be performed as inside, outside, or straight down the middle. But of course, in actual fighting combat, you won’t be able to have much time to do many rituals.

Does an Axe Kick Actually Work?

Yes, absolutely. An axe kick is commonly seen in sparring,  breaking, stretching, and demonstration. It can also be used as an offensive and defensive technique. On the other hand, for this to actually be executed effectively, one must undergo training, know basic stretching and learn how to be flexible to avoid hamstring strain which is the most common injury of athletes. Remember that practice makes perfect and with the proper execution of steps, you can do an axe kick. If done correctly, it can be a powerful technique that could send opponents to the ground.