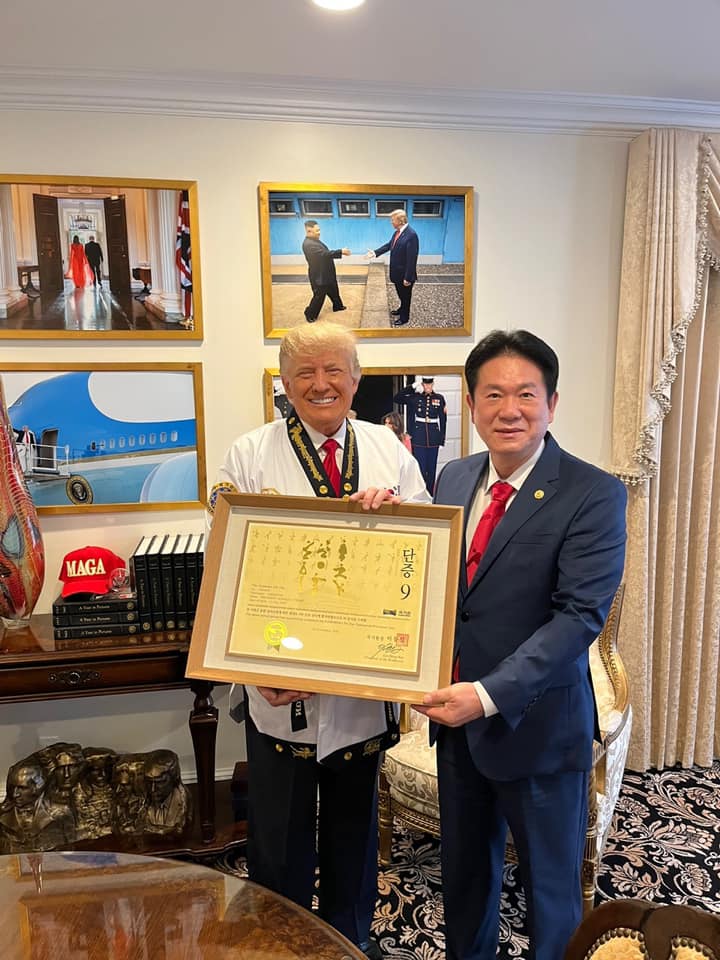 The World Taekwondo Federation is the official governing body of Sport Taekwondo and is solely in charge of athlete selection for TaeKwondo in the Summer Olympic Games.

No footage from the meeting between former president Donald Trump and the World Taekwondo Federation President exists currently online but several photographs surfaced depicting Trump toting an ornate DoBak, a Black Belt, and a certificate.

The Ceremony took place at Trumps Mar a Largo in South Florida, where he received his diploma, signed autographs and shook hands.

The Only Celebrity to Hold a Higher Rank than Donald Trump is Pope Francis, who was awarded a 10th Dan Taekwondo Black Belt by WTF President Chungwon Choue.

The World Taekwondo Federation prides itself on some of it's charitable and humanitarian efforts. The Pope expressed his interests in the progress made by the Taekwondo Humanitarian Federation whom performed for earthquake victims and taught Taekwondo to refugees and other groups with great needs around the globe.

Other Notable celebrities have been granted the 9th Degree Black Belt Rank from WTF as well including Vladimir Putin, Muhammad Ali (1976), and even Former President Barak Obama.

While these Black Belt Ranks were presented as honorary titles, many celebrities practice and enjoy Taekwondo or other martial arts legitimately.

Trump stated in his meeting with the WTF president,

"I think TaeKwondo is a magnificent martial art for self defense".

Donald Trump doesn't have a history of practicing martial arts but does endorse it's programs and even the UFC.

Trump seems to advocate self protection during the pandemic and troubling times per his interview in Donga.com

Donald Trump isn't a stranger to Martial Arts as some believe.

On June 5, 2008 Trump arranged a Press Release in New York to announce a new business venture into the world of mixed martial arts.

Donald Trump had created Affliction Entertainment, a company focused on hosting pay per view fights in an octagon, with live shows in the US and reality television in Russia. Trump began hosting UFC events starting in 2000.

Trump had somewhat saved the dying UFC, allowing them to host shows in his New York Tower in 2008.

“It’s sort of like, you just — somebody dies!” “I’ve never seen anything like it. And it’s terrible... It’s the gladiator. It’s not like, ‘Oh, how are the judges voting?’ OK? It’s like, you know, somebody just — succumbs.”

Trump had spoken on the Howard Stern show about mixed martial arts events. Dana White recounted on the time when Trump hosted Atlantic City UFC and at the time it was considered a blood sport and received heavy criticism.

It's unclear if Donald Trump will contribute more to the Martial Arts community in the future, but we hold our hopes that his publicity will inspire positive charge to new practitioners around the world and unite martial artists rather than devide them.

His passions are teaching martial arts, blogging and eating ramen.