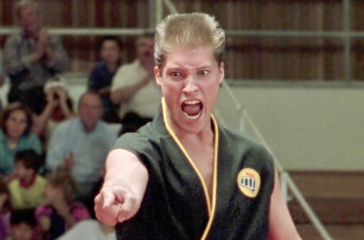 Mike Barnes was the "bad boy of Karate" from the Karate Kid III movie and has made a return to play a featured role in Season 5 of Cobra Kai on Netflix. The scrawny blonde haired boy has grown up in the past 30 years and presents some fight scenes that were obviously filmed in slow motion and sped up with after affects. Hollywood magic!

Mike Barnes is played by Sean Kanan, who must be hurting for work because he has resorted to offering Cameo at only $175. Kanan appears to have stayed in decent shape, but maybe neglected his Karate over the years. In this Syfy interview Kanan claims he's "kept up with his martial arts over the years". Despite this, his performance in Cobra Kai Season 5 is a good one. Cobra Kai is entertaining enough and there's more to enjoy than fancy kicks and fight scenes.

Many don't know that Kanan almost died on the filming of Karate Kid 3, doing his own stunts he tore abdominal wall and had to get staples in his stomach.

Sean Kanan had scored the role of Mike Barnes during an open casting call and was sent to train at Fumio Demura's Genbukai dojo in Shito Ryu. I've trained here. It was located in Santa Ana California for quite a long time, Demura was the original real Miyagi and inspiration for the character that Pat Morita played.