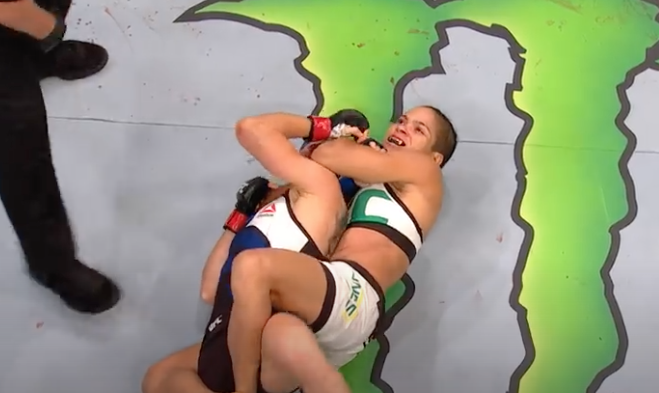 Women typically don't receive the recognition that they deserve in Mixed Martial Arts combat and sports in general.

Amanda Nunes' greatness and status as an all-time great in MMA cannot be denied. Since Women became eligible to compete in Mixed Martial Arts. Amanda Nunes has made a stronger case than anyone else.

Q: Who has defeated Amanda Nunes?

By competing in regional MMA events in Brazil, Amanda Nunes also known as 'The Lioness' had begun her professional Mixed Martial Arts career in 2008. Nunes' professional debut didn't go as planned, as she was knocked out in the first round in 35 seconds.

Although Nunes lost her first fight, she re-grouped and went on to win her next three fights. The fights lasted only 11 seconds in the first round, with her first victory coming from a corner stoppage. Nunes then went on to defeat her next opponent in ten seconds by Technical Knock Out.

Nunes won her first championship at UFC 200 when she defeated then-UFC women's bantamweight champion Miesha Tate by first-round submission. It was a one-sided fight in which she bloodied Tate with heavy shots before submitting her with a rear-naked choke. Nunes joined the shortlist of UFC bantamweight champions with her win.

Nunes would go on to make history, accomplishing something that no other female MMA fighter has ever done. She fought then-UFC women's featherweight champion Cris Cyborg at UFC 232 at 145lbs in a super fight.

In previous fights, Cyborg was the feared striker, and it appeared that her opponents were defeated before she entered the octagon. Nunes, on the other hand, quickly defeated Cyborg and made history.

Seconds into the fight, Nunes knocked out Cyborg to win the featherweight title. She was the only UFC fighter at the time to hold two UFC titles at the same time, joining Conor McGregor and Daniel Cormier.

Nunes had previously successfully defended the bantamweight championship three times before defeating Cyborg for the women's featherweight title. Ronda Rousey and Valentina Shevchenko, as well as Raquel Pennington, were among the former and future champions she faced.

Nunes returned to 135lbs instead of vacating her bantamweight championship and remaining at featherweight permanently. She defeated Holly Holm and Germaine de Randamie twice to defend her title. Nunes had significant victories in those elections. She had then defeated all of the previous women's bantamweight and featherweight champions in the UFC.

Because she hasn't shied away from the pressure, Nunes has remained active and performing at a high level. Because of the added pressures that come with success, many fighters have taken a break from the sport.

Nunes appears to have progressed as a fighter since beating Cris Cyborg. One of the most one-sided fights in UFC history was Nunes' first defense of the women's featherweight title against Felicia Spencer.

There was no doubt Nunes would get her raised, even if it went to the judges' scorecards. The judges gave Nunes a 50-44, 50-44, and 50-45 victory in the fight to put her dominance into perspective.

In her most recent title defense, she completely dismantled Megan Anderson and only took two minutes to submit her with an armbar. For the second time, Nunes defended the UFC women's featherweight title against Anderson. Despite coming off back-to-back first-round victories, Anderson couldn't get any offense going against Nunes.

The fact that Nunes continues to set records is impressive in and of itself, as the UFC is regarded as the premier MMA promotion. One thing is certain: the more records a person keeps, the stronger their case will be. Nunes' UFC records are impressive, and it's difficult to argue.

Amanda Nunes has the fourth-longest single title reign in UFC history as the women's bantamweight champion. Nunes has the most wins in women's title fights in UFC history, with nine. Strikeforce and Invicta FC championship victories are also very impressive.

Her 14 UFC victories are also the most among the women's divisions in the UFC. In the UFC women's bantamweight division, she also holds the record for most stoppage wins. Finally, her 12-fight win streak is the second-longest active win streak in the UFC.

Nunes still has a long way to go in the sport. If her recent fights are any indication, she will take a step back and make it clear that she is the greatest of all time.