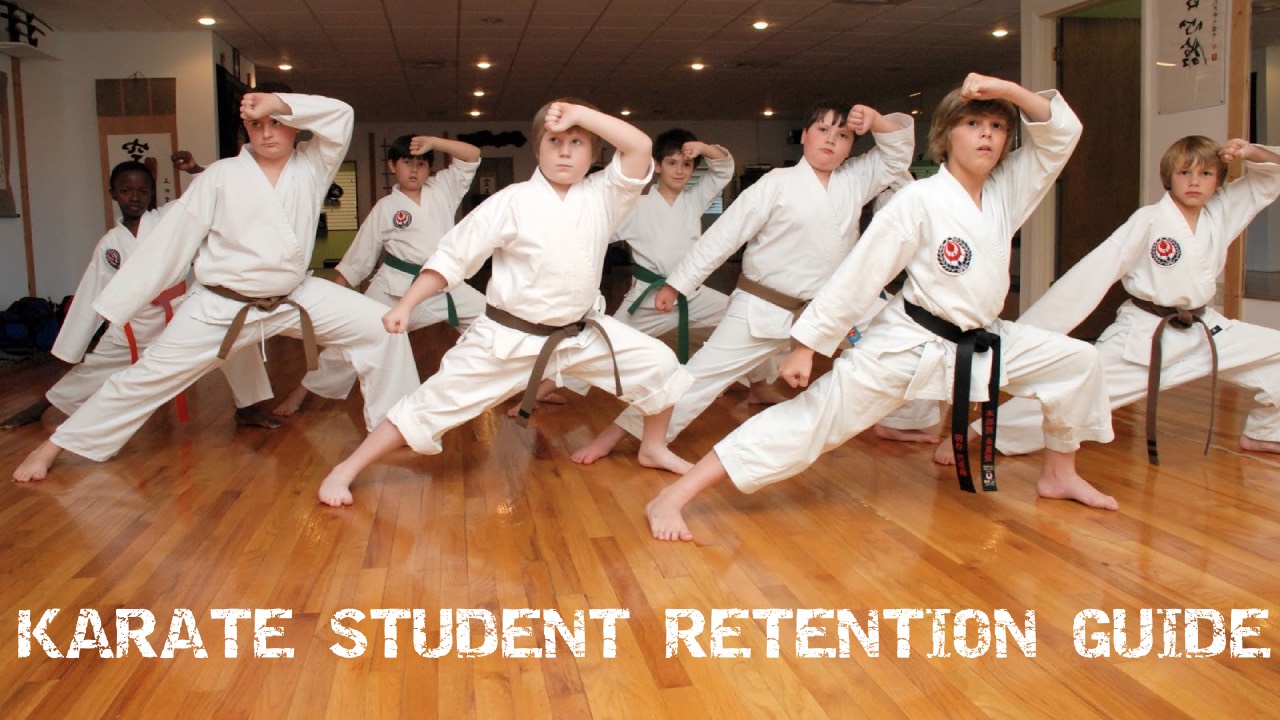 Getting new Karate Students in the door is a major challenge for most Karate School owners.

Between Google Ads, Social Media, and even hitting the streets to pass out fliers, free class passes, or doing events to generate interest can be exhausting.

But, once the magic has faded and students have hit their 1 year mark and haven't earned that black belt, many Sensei may be wondering why Karate Student Retention is waning.

Sometimes, it may be that kids just want to try lots of different sports and activities. Sometimes.

Maybe karate is just not the right fit.

There are three major factors to consider for increasing the length of your Karate Student Retention average:

3. On-boarding (after they join)

Pre-enrollment Research - This is all about understanding who your potential karate students are before they come to trial class/orientation.

Most schools approach enrollment like this: "I know that I need new students if I am going to grow my karate school, so I will just get them in the door any way possible".

But this is not how to maximize karate student retention.

If you want to keep karate students enrolled, then you must do pre-enrollment research.

This is where you ask questions like: "What are their goals?", "What brought them into karate; Is it for fitness or more focused on self defense?"

You can also ask for email lists from local schools that have closed down and find potential karate students from those lists as well.

Once you have a list of targeted karate prospects, then your marketing comes into play.

Marketing - The best way to market your karate school is through online ads that you can target potential karate students with.

Unfortunately, karate schools fall into the trap of thinking that they should run ads on Google and pay for high CPC keywords to get karate students in the door because karate is a popular search term.

Maybe it works, but this is not how you keep karate kids enrolled!

Your goal is to find out what karate video will appeal to your audience from those ads then split test those videos against each other to see which one performs the best for you.

The better your ad performance, the more effective your Karate School marketing efforts will be as well as lowering your overall cost per lead/signup.

If karate is marketed as a "no pain, no gain" karate club then karate students will likely quit karate after 8-12 months.

The most effective approach to karate student retention is to target karate kids and what they enjoy.

For instance: If you find that your karate kids like super heroes, or ninjas, or comic book characters then use those themes in the demo kata videos and marketing materials for your school!

Kids love superheros which means they will more than likely stay with karate longer compared to something that may not appeal as much such as self defense.

Another important tip for on-boarding new Karate Students is making them feel comfortable at your school right from the start.

What karate students seem to want most is a karate instructor that understands karate and karate-do as well as being able to relate to them on a personal level.

The goal is not just marketing, but teaching marketing strategies for karate schools that will keep karate kids enrolled in long term training.

You want your Karate Students to feel welcome at your school each time they come for class, and enjoy what you have to offer.

Then, effective marketing strategies using online advertising tools which you can test out yourself.

Finally, having a great karate instructor who makes new karate students feel welcome from day one.

Which karate school will your karate students choose to remain enrolled and train with over and over again?

That's the question that karate schools need to ask themselves.

In reality, karate kids don't have a strong sense of loyalty between karate dojos because they may find another karate school "funner" or "cooler".

As a karate instructor, you not only want your karate students to stay enrolled for as long as possible, but ideally for life!

The best way to accomplish that is by maintaining a good relationship with your karate student from the first time you meet them until their black belt graduation.

How to keep a Karate Student Enrolled Longer.

So karate schools have a karate student that pays for karate classes and then after a few months they quit karate.

If you understand why karate students quit karate, then you can alter your business model to make sure the same thing doesn't happen to other karate students.

For example: If it's because of their school not being fun or because the karate instructor didn't care about them, then focus on providing more fun workouts while also establishing a personal relationship with each karate student.

Keep in mind that for every karate dojo out there, you're going to have a different market and audience compared to other karate schools even if you train in the same style of karate.

For karate students that like karate for karate's sake, they will not be concerned about your karate school being "fun" and will want to focus more on kata and kihon.

This means they're probably paying attention to the instructors who demonstrate kata in class.

If any of those karate instructors show a lack of technical knowledge or don't demonstrate kata correctly then this would probably cause them to stop attending your karate dojo after a few months.

If you say that karate is for self defense but all you teach is point sparring with no contact, then this most likely won't appeal to the Karate Students that joined looking for some type of real Kumite training or Bunkai.

These types of karate students are also more likely to stop attending karate lessons after the first few months because they're not getting what they signed up for.

A karate school doesn't only need kihon and katas, it should offer kumite, bunkai and self defense as part of their arsenal.

On the other hand, karate schools with a focus on kumite will need to make sure that they provide plenty of instruction demonstrating how kumite works for sparring.

SanBon Kumite is super important because you can't just go full speed without knowing how to block an attack or execute your own counterattack at high speeds.

Karate in Japan and Karate in America. How retention differs.

Many karate schools in America have a karate program that's very different from karate dojos in Japan.

In karate dojos across Japan, karate students generally spend less time training kata and instead focus more on kumite (sanbon kumite is the most popular), bunkai and self defense.

The idea is if they can demonstrate Sanbon Kumite or ippon kumite properly, then they will at least be able to make it out of a fight without any serious injuries and go home safe no matter what.

On the other hand, some karate instructors in the USA like to put their emphasis on kata which results in Karate Students spending most of their time training kata instead of kumite and bunkai (self defense).

I'm not saying that kata practice is a bad thing, kata can be used as a way to improve your karate by looking for better ways to perform the kata and find different applications for each motion.

The issue with putting too much emphasis on kata is that karate students will need to do extensive amounts of kihon training before they can even begin thinking about practicing katas.

Kihon might not apply directly to Sanbon Kumite because it's blocking drills without any punching/kicking, but it's still very important because you've got to block and move correctly or else you can't progress.

Working with partners can increase both the fun aspect of Karate and the unity of having a training partner to motivate you to come to class.

Increase retention by making Karate classes both effective and fun.

If you have fun at karate class, you will keep going to it.

Whether they're playing rock-paper-scissors kumite games in kata sparring or doing some type of push up challenge, these types of activities help build unity and increase retention.

When karate schools introduce more casual training and repetitive activities into their regular drills, this is usually when Karate Students feel less enthusiastic about participating in class.

They're less likely to come back after they've had a few months off in the holiday months.

There's no need for them to feel like robots just because they're practicing basic kihon drills such, mix it up with some zany drills or offer rewards to the fastest and punishment to the slowest, like 5 push ups.

Challenge students who need a push and are bored, but let kids be kids and have some fun.

This is the Yin and Yang of Karate Schools and finding this balance is the key to Karate Student Retention.