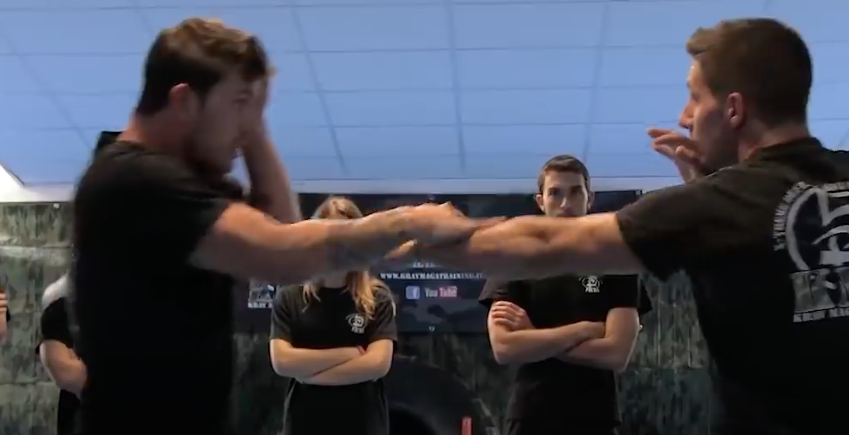 What is Krav Maga?

Krav Maga is a mixed martial arts style developed by the Israeli military in the 1940s. It means "contact combat”. It is arguably one of the world’s deadliest martial arts disciplines. Dubbed as ‘The Art of Staying Alive’, this official self-defense system of the Israeli Defense Forces (IDF) is a lethal method of survival.

Various military and law enforcement agencies' training programs in the US and around the world now include this martial arts discipline that combines Boxing, Judo, Jiu-jitsu, and Aikido.

As Hollywood films like Skyfall, Collateral, and Blood Diamond have incorporated Krav Maga moves into their fight scenes in recent decades, the martial art has skyrocketed in popularity and demand for Krav Maga training has soared around the world.

The History of Krav Maga

Krav Maga’s story of origin began with a young Hungarian-Jewish athlete named Imi Lichtenfeld (Imi Sde-Or) in the1930s. A renowned boxer, wrestler, and gymnast in Bratislava, Slovakia, he created what thought to be the foundations of Krav Maga to help protect the country’s Jewish community from the threat of anti-semitic groups that rose to power in pre-World War II era.

By using his martial arts knowledge and skills, along with a group of young men he trained, he was able to effectively use martial arts to disable and neutralize many violent attacks directed towards Jewish citizens in his area.

Anti-semitic movements grew rampant despite their best efforts. In order to avoid being a target, Imi fled to Palestine, where he joined Haganah, the Jewish paramilitary organization in the British Mandate of Palestine that eventually became the core of the Israeli Defense Forces, like many others.

The United Nations granted Israel statehood in 1948. Imi was appointed Chief Instructor of Physical Fitness at the IDF at this time, and he was tasked with developing a combat training system for the recruits. Imi developed a simple, efficient, and effective self-defense system that could be applied to combat situations because he was only given three weeks to train each batch of recruits – a system we now know as Krav Maga.

Following his retirement from the IDF, Imi spent the next two decades training IDF soldiers and refining Krav Maga and adapting its moves to make it more suitable for civilian use. He decided to open a Krav Maga training center for the general public after the project was completed. Imi founded Krav Maga Association, a non-profit that promotes and teaches Krav Maga in Israel and around the world, a few years later (in 1973), which sparked the global spread of Krav Maga.

The Principles of Krav Maga

This principle acts as the ‘umbrella’ principle for all of the other principles and it’s something that you will encounter time and time again throughout your practice. It’s crucial to note that Krav Maga’s main goal is to neutralize the threat/ attacker as fast as possible. Krav Maga is not a sport, hence there is no competition nor rules so pretty much anything goes.

You are encouraged to control and neutralize your opponent with any means necessary to avoid any harm or injuries to yourself. This means that when push comes to shove, you must do whatever you can in order to survive - brutal efficiency is the only concern.

Instead of having strict structures or patterns of movement like many martial arts, Krav Maga focuses on three simple moves: strikes, holds, and blocks. A third requirement of Krav Maga is that its practitioners work from their instincts rather than following a pre-determined routine.

It was designed to be effective and efficient, so you can use any move you think will quickly 'get the job done.'

In this case, Retzev, the Hebrew word for 'continuous motion,' translates to 'violence explosion.'

The goal is to defeat the attacker with a continuous series of aggressive and offensive movements, allowing the practitioner to use any combination of moves depending on the situation and/or attack. Here's a video of a Retvez drill:

One can more effectively neutralize the attacker by combining defense and offense moves. In addition, practitioners are encouraged to 'hear' and use the body's natural reflexes. This ability to improvise enables quick adaptation to any situation.

Mastering the location of vulnerable soft tissue and pressure points is critical for a Krav Maga practitioner. This is because when these points are stricken, the attacker can quickly become helpless in real-life situations. Krav Maga emphasizes that when your life is at stake, etiquettes are unnecessary.

As a result, 'crass' or 'gory' moves like eye-gouging, groin attacks, and throat strikes are well-accepted in Krav Maga.

Take advantage of weapons or any objects nearby

Krav Maga students are taught how to properly use weapons (guns and knives) to defend themselves from an attacker in addition to physical moves. During a fight, Krav Maga also teaches its practitioners to use any object within reach as a weapon.

This means that you should take advantage of sticks, keys, or basically anything else you can get your hands on that can harm the attacker.

Although Krav Maga incorporates punches and kicks from other martial arts like Boxing, Savate, and Muay Thai, as well as grappling and disarming techniques from Jiu-Jitsu, Judo, and Wrestling, its training is vastly different.

This is because Krav Maga emphasizes self-defense in the event of a real-life emergency against armed or multiple opponents. Here are some potentially life-saving moves you'll learn and have at your disposal when you train in Krav Maga.

If executed correctly, this move can quickly neutralize an attacker and allow them to escape or continue the offensive with another move. Similar to boxing, you would use your fist as a 'weapon,' with the power coming from bending knees and a hip twist – aiming for the opponent's chin.

This is a great way to get away from your attacker if he is standing next to you. Begin by shifting your weight to your leg and crossing it in front of the opponent's leg. Finish with a heel kick and a slight twist of your hips. This move is most effective when done on the abdomen, knee, or shin.

Instead of punching with a clenched fist, the palm strike requires you to use the 'meaty' portion of your hand at the bottom, near your wrist. As if this part of your hand were a weapon, it is extremely strong and unlikely to be injured when striking the attacker's skull or bones. This move can be very effective when used to target the opponent's head and neck.

Krav Maga may appear complex and intense to those who are unfamiliar with it. Krav Maga, on the other hand, is a self-defense system that can be learned by anyone, regardless of their size, strength, or level of fitness.

This martial arts discipline is ideal for anyone with no prior martial arts experience because it focuses on simple and practical techniques tailored for (possible) real-life scenarios.