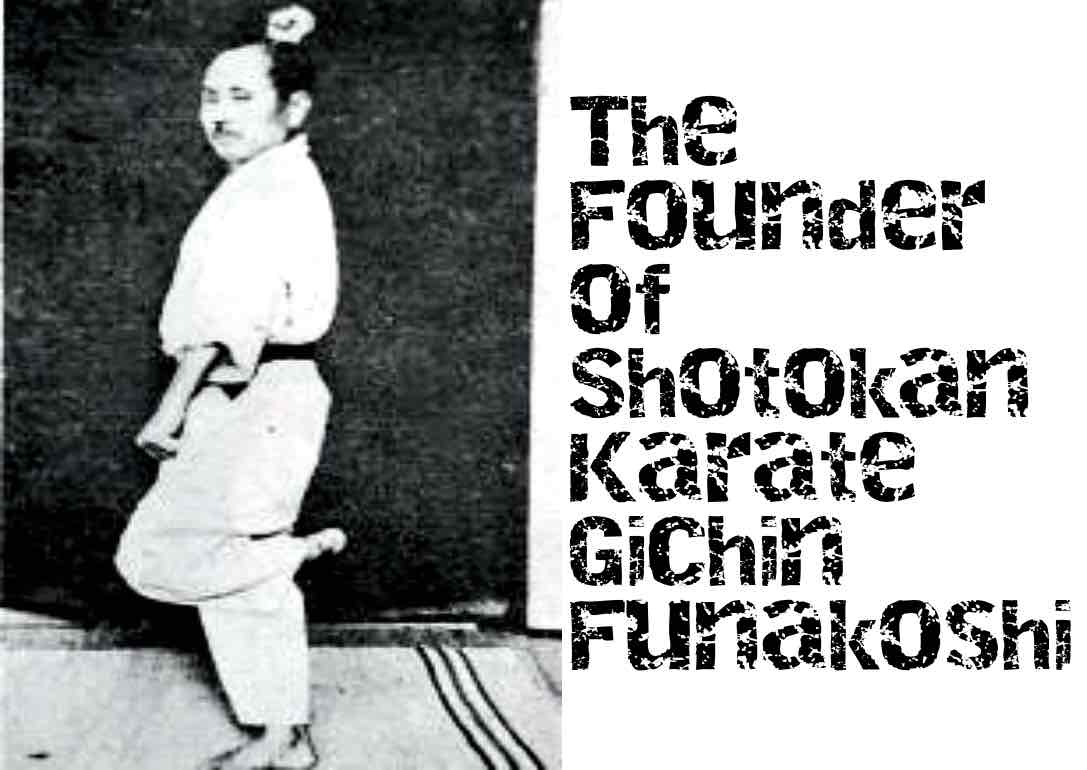 Gichin Funakoshi (Born, 1868 December 23 ( Meiji first year November 10 ) - 1957 April 26 ) is from Naha Okinawa Prefecture, known for founding modern day karate . The first time karate (then Tote or Te ) was introduced to the mainland Japan, Shotokan was the style founded by Funakoshi. He was credited with popularizing karate on the mainland, despite learning Fighting Arts in Okinawa.

Gichin Funakoshi born in Meiji Era 1868. His Mother was KoshiYoshikururu as her eldest son, hailing from Shuri Yamakawa Village (now Naha was born in Shuriyamagawa Town)

The Yoji Tominakoshi family was a tributary (branch family) of the Yoji Yamada family, a prestigious family of the Tomari Shizoku, and was a low-ranking family ( Chikudun family) who served the Shuri royal government for generations . This means he was born with Samurai blood lineage, as his ancestors had served under Ryukyu Dynasty lords.

Funakoshi was sickly when he was a child, speculated because he was born prematurely, so he was raised at his mother's parents' house. Initially, it had been hoped that he would earn medical school admission, which is seen as a symbol of the samuraiabandoned because it was a condition to turn off the  the road of teachers instead.

Around age 11, Funakoshi became a student of Anko Asato, learning Chinese based martial arts called Shuri Te. He was notably skilled even at a young age.

Prior he studied Naha Te style for 3 months under lord Mizuumijo Daitadashi but the style wasn't suited for his short stature.

Funakoshi learned Kusanku from Asato which became his specialty kata.

Funakoshi was Asatos only disciple karate student, but he also briefly studied with Anko Itosu, founder of Shorin Ryu Karate. There is speculation that his son Gigo learned Karate with Kenwa Mabuni and then taught it to his father according to Kenwa Mabuni Sr.

Okinawa Prefecture Normal School in 1880 opened where he graduated from the one year course. Funakoshi passed the exam at 21-years-old in 1887 and  he started his teaching life as a substitute teacher. After that, he passed the regular course guidance test and was promoted to a regular teacher.

Funakoshi is known for teaching Karate to elementary school students at night, notably Tekki or Naihanchi Kata as well as Pinan (It's said by Ryozo Fujiwara that he learned Pinan Kata from Kenwa Mabuni). He eventually garnished the nickname Pinan Sensei among students.

Upon 30 years of teaching, Funakoshi created the Okinawa Student Supporters Association and Okinawa Shobukai in order to support the spread of Karate and host activities.

In May of 1917 he attended a special Karate event at Kenwa Mabuni's home, which many style masters also attended including Kentsu Yabu, Chomo Hanashiro, and Miyagi.

In 1921 he hosted a Karate student to perform in from of ShuriJo Castle in Okinawa for Emperor Showa who stopped by during his visit to Europe.

In 1922 he inspired his martial arts friend Jigoro Kano, who founded the Kodokan Judo center in Mainland Japan.

Kano invited Funakoshi to Tokyo along with Gima Makoto, and they demonstrated Kusanku and Naihanchi for over 200 Tokyo Universities and Ministry of Education viewers.

Funakoshi decided to stay in Tokyo and teach karate. He also wrote Ryukyu Kenpo Karate in this year, the first published karate history.

It's said that the Judo students at the Kodokan were not impressed by Karate Kata, as it was only a pattern compared to their Randori sparring training.

Modeling the excitement of Randori Judo matches, together with Hironori Otsuka (founder of Wado-ryu) and Yasuhiro Konishi (founder of Shindo Ryu), Kumite was created.

Funakoshi was a big advocate of Karate Kata, and was bothered with the hassles of creating Kumite. He was strict about this, but some student in University of Tokyo and other clubs secretly practiced free sparring. He protested Kumite in Karate Clubs by resigning in 1945.

In 1936 Funakoshi published a new book and is credited for changing the pronunciation to Karate from its other spellings.

In 1940 Funakoshi built the Matsubokan dojo, but it was destroyed by fire in 1945. That same year his successor and son Yoshigo died of illness.

Funakoshi is noted for creating the Waseda University Karate Club and in 1948 Funakoshi disciples formed the famous Japan Karate Association.

In his late years he quarreled with Anko Itosu over the future of Karate and what was truly Okinawan orthodox Karate.

Want to learn Karate? Check out our Online Karate Programs