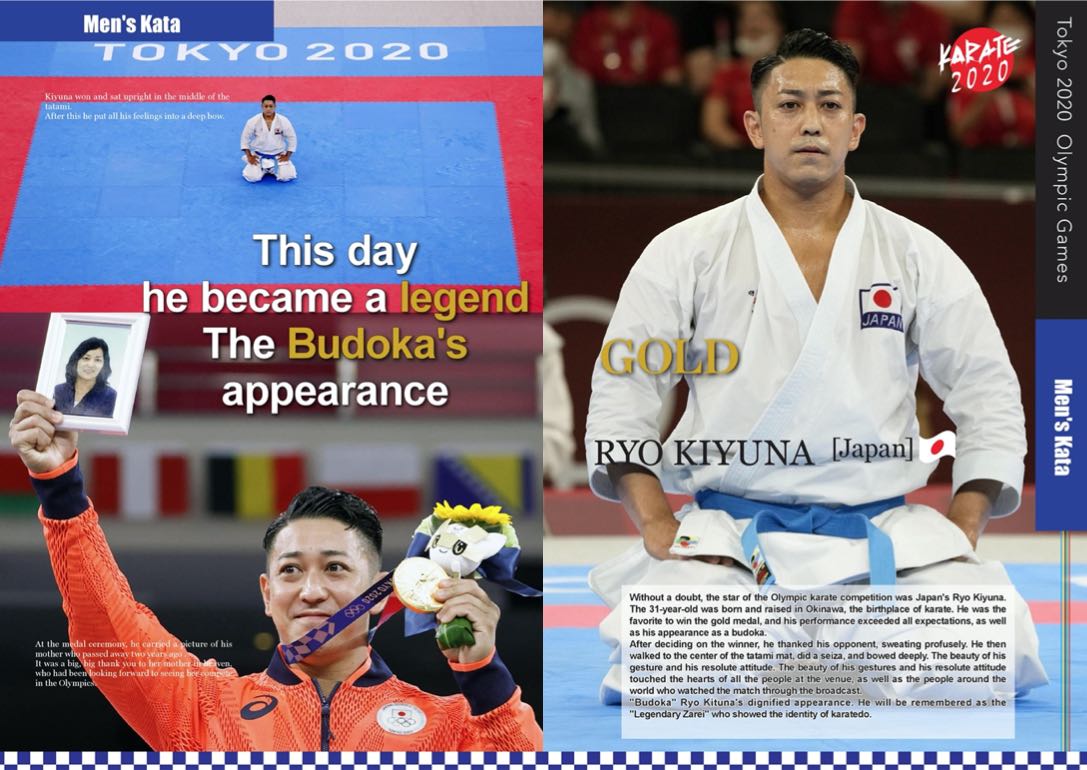 ‍
This day he became a legend. The Budoka's (Karate Competitor) appearance in JAPAN led to GOLD in Men's Kata.
RYO KIYUNA has become the world's greatest Karate Kata competitor.

At the medal ceremony, he carried a picture of his mother who passed away two years ago.
It was a big thank you to his motherwho had been looking forward to seeing her son compete in the Olympics.

Without a doubt, the star of the Olympic karate competition was Japan's, Ryo Kiyuna.

‍
The 31-year-old Karate Master was born and raised in Okinawa, the birthplace of karate. He was the
favorite locally and internationally to win the gold medal, and his performance exceeded all expectations, as well
as his appearance as a budoka (karate competitor).

‍
After deciding on the winner, he thanked his opponent, sweating profusely.

He then walked to the center of the tatami mat, did a seiza, and bowed deeply.

The beauty of his gesture and his resolute attitude touched the hearts of all the people at the venue, as well as the people around the
world who watched the match through the broadcast.

He will be remembered as the
"Legendary Competitor" who displayed the identity and essence of karatedo.

The Final Match of the Olympics Karate Kata Competition was tense.

‍
Japan's Ryo Kiyuna and Spain's Damian Quintero Capdevila, two of the world's top two in terms of performance so far, met in the Olympic final.

‍
Both Quintero and Kiyuna were unparalleled in their performances in the elimination round and ranking round.

From the very beginning, it looked as if the two of them would battle for the gold medal.

‍
In the final, Quintero chose to perform Suparinpei first. There was no wasted movement, and he stood beautifully, performing with a high degree of accuracy. It was probably the best performance in recent years. As expected, he had adapted to this stage of competition.

‍
Later in the day, Kiyuna performed Ohan Dai, a kata from Ryuei-ryu added into the competition since 2019.

In the first part of the performance, he grabbed the imagined opponent and pulled him in. In the second part, he dropped his center of gravity and performed keri (kicking) and uke (blocking) in four directions.

‍
He showed an outstanding ability of snap and explosiveness in his techniques.

‍
As a result, Kiyuna won the gold medal with 28.72 points, more than 10 point ahead of Quintero.

‍
This is the first gold medal for Okinawa, the birthplace of karate, which was the only prefecture without a gold medal in the Olympics.
Source: JAPAN -OCT 2021 JKFan/015

The sight of Kiyuna's Zarei (Old Style Bow) in the middle of tatami shook the hearts of the many people watching. In his victory speech,
Kiyuna expressed his feelings in few words, "I am grateful for everything."


In Okinawa, the birthplace of karatedo, Kiyuna has been training 365 days a year for more than ten years with Sensei Tsuguo Sakumoto and his teammates in the team kata, Arata Kinjo and Takuya Uemura.

‍
On this day, Sakumoto-sensei sat in the coach's seat and watched Kiyuna from the closest distance.

Before Kiyuna went up to the tatami and after he came down from the tatami, they would all bow together.

‍
This is the first Olympics in the karate world. Many Japanese Citizens felt strong emotions seeing this level of respect.

Kiyuna entered the hall and bowed with Tsuguo.

"Of course I want to win. I can't tell youSakumoto Sensei before going up to the tatami of the performance how happy I am to win on the most prestigious stage of karate."
‍
But more than that, Sakumoto-sensei Tsuguo Sakumoto, was also teaching at the big match.

"Whether you win or lose, as a person who is committed to karate-do, you must be polite and respectful."

‍
Tsugumoto's wish for his beloved disciple has not changed.

In the past, after Kiyuna had won his first world championship, his sensei severely reprimanded him for his slight slackness. He even made Kiyuna start all over again from cleaning the competition area.

‍
Before the tournament, when asked about his greatest strength, Kiyuna said, "The best training environment."

He said that his Gold medal was won by the team.

"With the members of Sakumoto Karate I would like to express my heartfelt the dojo to practice as usual. The presence of Kinyo Arata and Academy. "

Immediately after returning to Japan, they went back to give gratitude to all of them.

‍
Takuya Uemura, who has been training with Kiyuna together for more than ten years as teammates in team kata, was also given significant attribution.

Like this article? Check out our other blogs for more Karate & Kobudo News!