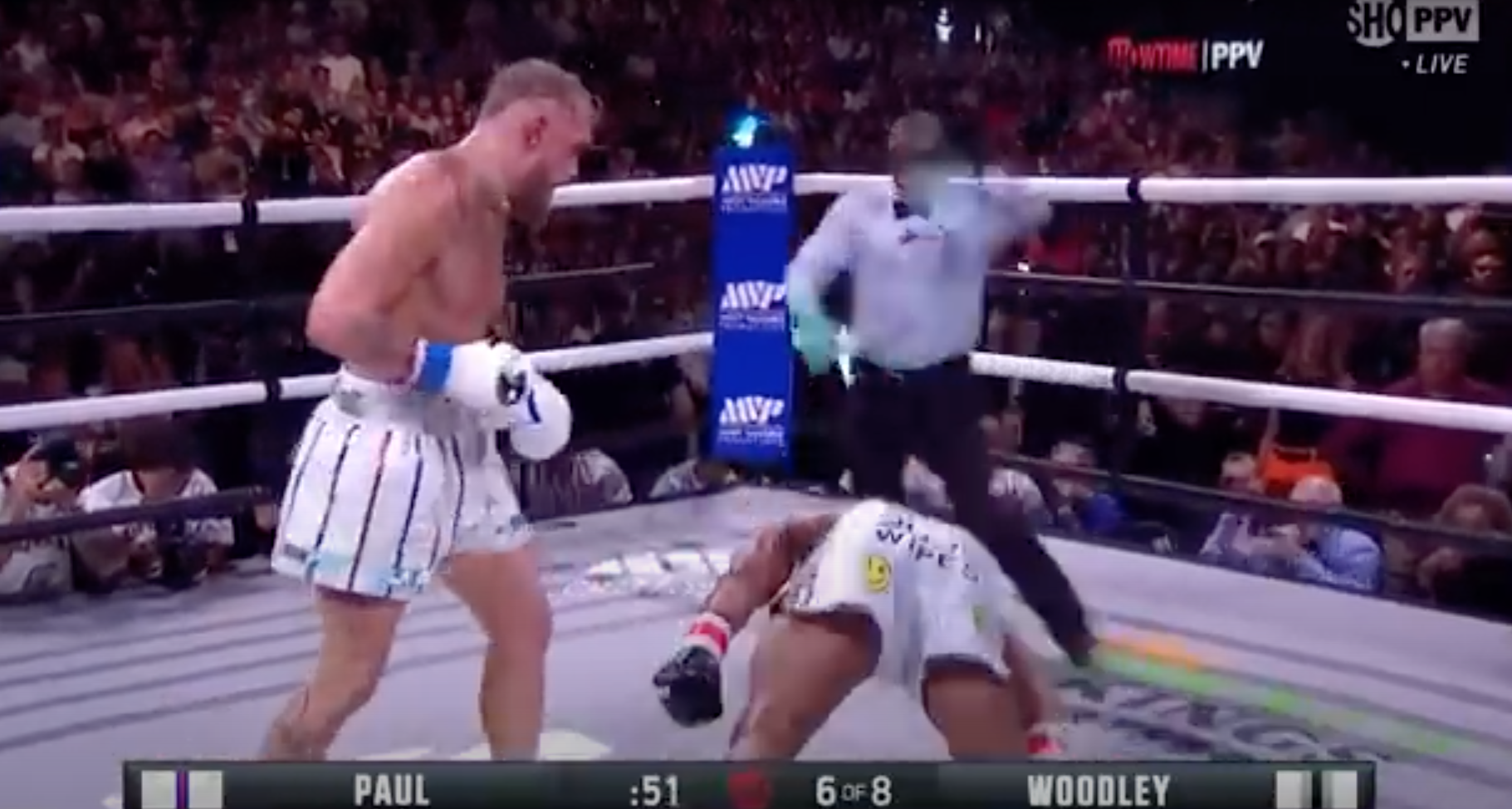 One Big Right Hook from Jake Paul ended the fight in the 6th Round, as Tyron Woodley II fell unconscious to the mat.

Showtime PPV broadcast the fight on Sat Dec 18 2021 from Arena in Tampa FL, and international viewers were able to watch with Fite.Tv.

Youtube Creator turned UFC fighter and now Boxer, Jake Paul has been criticized as someone lacking true skill and just competing for fame.

His alleged bout with World Champion and Boxing Legend Floyd Mayweather was a disappointing display for many, this fight could be the redemption and validation Jake needs. Fans are getting excited after Jake calls out notable fighters in a post fight press table including Nate Diaz.

Jake received some nasty words from the UFC fighters that he called out post fight, saying that he couldn't afford them and that his fights weren't legitamate.

So far, Jake Paul is 5 Wins and 0 Losses, winning with a knockout in every match. Woodley is known for being one of the best Welterweight Division MMA fighters of his time.

In the first two rounds the two fighters kept their distance, moving quickly and lightly on their toes, feeling out the attacks and range of eachother. Lots of punches were being thrown, most missing or being blocked. Jake Paul seemed to rely heavily on his jabs to both the body and the head, with multiple combinations of body / head combination left hand jabs.

Meanwhile, Tyron was using a lot of hard thrown jab / cross combos. Many of the close combat exchanges ended in a reset after Tyron would use a clench to delay Jakes pressure.

The Third and Fourth Rounds, was a lot of jabs from Tyron as Jake Pauls guard seemed to lower. Jake relied less on his Jabs and started swinging more wildly as getting struck with a powerful jab to the eye in the fourth round. His forehead seems to be bleeding, lacerated from the blow. There was a lot of clenches performed throughout the middle of the fight and it seemed to be losing steam, compared to the lively start.

Third and Fourth Round Highlight Reel

The two fighters picked up speed in the end of the fifth round and into the sixth. Abandoning the clenches and landing hard hooks to the head, jaw and ear. Tyron started landing huge left hooks to Jakes Right ear again and again. Jake was swinging big hooks wildly often missing, but landing some nice counters. The two fighters started to look tired and back away slowing down the pace. Then in a memorable last exchange, Tyrons guard fell as Jake Paul landed a hard right hook across the jawline, ending the match.

Fifth and Six Round Highlight Reel

Jake Paul ran to the turn buckle and began shouting obscenities, and celebrating his win.

Overall the match was pretty good, and was a nice last minute adjustment in lieu of the original cards. I think Jake Paul has a lot of room for improvement in addition to his raw talent and we may see some great matches to come if he can learn finesse and increase his stamina.